The Falkirk Wheel is a rotating boat lift in Scotland, connecting the Forth and Clyde Canal with the Union Canal. The lift is named after the nearby town of Falkirk in central Scotland. It opened in 2002, reconnecting the two canals for the first time since the 1930s. Planners decided early on to create a dramatic 21st-century landmark structure to reconnect the canals, instead of simply recreating the historic flight that existed prior to 1933. The two canals served by the wheel were previously connected by a series of 11 locks. With a 35-metre (115 ft) difference in height, it required 3,500 tonnes of water per run and took most of a day to pass through the flight.

By the 1930s these had fallen into disuse, and the locks were dismantled in 1933. The Forth and Clyde Canal closed at the end of 1962, and by the mid-1970s the Union Canal was filled in at both ends, rendered impassable by culverts in two places and run in pipes under a housing estate. In 1976, the British waterways Board decided after a meeting with local councils that the Forth and Clyde Canal, fragmented by various developments, was to have its remaining navigability preserved by building new bridges with sufficient headroom for boats and continuing to maintain the existing locks.

Restoration of sea-to-sea navigation was deemed too expensive at the time, but there were to be no further restrictions on its use . A 1979 survey report 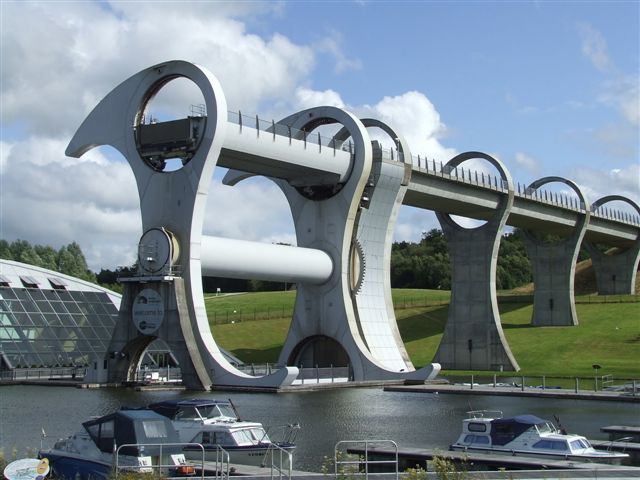 documented 69 obstructions to navigation, and sought the opinions of twenty interested parties to present the Forth and Clyde Local (Subject) Plan in 1980 Funds were raised through the Lottery and local councils, Scottish Enterprise and private donations and from the EU. The wheel has an overall diameter of 35m and consists of two opposing arms extending 15 m beyond the central axle and taking the shape of a Celtic-inspired, double headed axe.

The caissons or gondolas always carry a combined weight of 500 tonnes of water and boats, care is taken to maintain the water levels on each side, thus balancing the weight on each arm. According to Archimedes Principle , floating objects displace their own weight in water, so when the boat enters, the amount of water leaving the caisson weighs exactly the same as the boat. This is achieved by maintaining the water levels on each side to within a difference of 37 mm using a site-wide computer control system comprising water level sensors, automated sluices and pumps.

The wheel raises boats by 24 metres but the Union Canal is still 11 metres higher than the aqueduct which meets the wheel. Boats must also pass through a pair of locks between the top of the wheel and the Union Canal. The Falkirk Wheel is the only rotating boat lift of its kind in the world, and one of two working boat lifts in the United Kingdom, the other being the Anderton boat lift .

A visitor centre is located on the east side of the lower basin. Boat trips on the wheel depart approximately once an hour. Since the wheel opened, around 4.4 million people have visited and 1.3 million have taken a boat trip, with around 400,000 people visiting the wheel annually.